skip to main | skip to sidebar

hoopsnake collaborative project in Saint Louis at the Good Citizen

made with the help of: 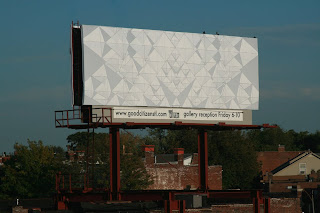 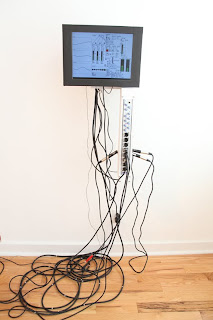 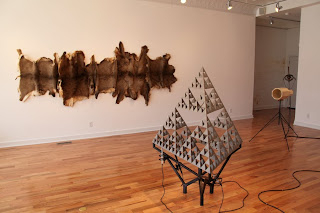 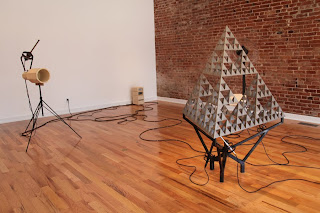 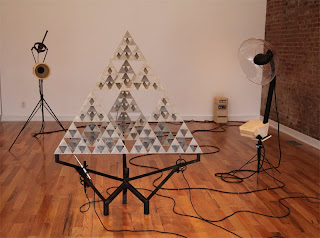 Reflected Territories is a sculptural work that shapes sound with
constructed objects and the architecture of the building itself. The central sculpture was designed to reflect, obstruct, amplify, or attenuate certain sounds depending on their wavelength and volume. Certain sounds can pass through each of the successively smaller iterations of the open triangles while other are reflected in other directions or killed altogether. The differences are hardly registered by the human ear but measurable. Microphones gather the sounds at different points and create a feedback loop of the sounds by sending them back through the small speaker and the larger parabolic speaker placed a few feet from the sculpture. The sounds are processed by an opensource programming environment called Pure Data. A second computer captures sounds as they bounce around (the resonant frequencies that bounce through the building itself) and projects them via the octagonal speaker and microphone at the back of the room. The arrangement of the sounds is dictated by what the computers record and find in the sounds and simple but shifting directions written into the code.

The entire sound field is initiated by introducing a single sound into the room, a recording of one key from a piano in need of tuning. This sound reappears periodically, adding another referential layer of feedback. While not musical, the composition of the sounds is dependant on this very simple sonic theme similar to, but more basic and fundamental, the approach taken in arrangement of a fugue in classical music in which a simple series of notes is used to construct a complex work. These sounds are not arranged to provide a recognizable musical structure. Rather they are reformed and shaped by the building, the sculpture, and the animal skins on the wall with the intent of expanding and compressing the sense of space and altering our sense of the place.
Posted by Greg Pond at 10/10/2009